Edward R. Murphy P’01 H'12 was appointed to the Elizabethtown College Board of Trustees in 2001. By making this commitment of his time and talents, Mr. Murphy demonstrated his belief in the ideals, mission and future of Elizabethtown College. As a trustee, Mr. Murphy serves as vice chair of the Buildings & Grounds committee and as a member of the Student Affairs committee.

Prior to retiring after 31 years with the West Publishing Company, Mr. Murphy served as facility manager where he was instrumental in designing one of the Company’s office buildings, located in Westbury, Long Island, N.Y. He rose to his leadership role by rising through the ranks serving in many different positions throughout the Company.

No information about Mr. Murphy would be complete without recognizing the commitment he has made to the Vulcan Company Engine #2 in Lynbrook, New York. In recognition of his 50 years of service to the fire company, he was appointed Honorary Chief of the Vulcan Company. Mr. Murphy’s dedication to public service, to the community, and to Elizabethtown College and its students exemplifies the College’s motto of “Educate for Service”.

A strong supporter of lifelong learning, Mr. Murphy has actively supported the adult students of the School of Graduate and Professional Studies. In the pursuit of his education, Mr. Murphy was himself an adult student. After the death of his father during his freshman year at St. John’s University, he went on to complete his degree in Business Administration as a nontraditional student taking classes at night, while working during the day to support his family. He has a true understanding of the sacrifices and dedication it takes to combine the pursuit of education with the demands of full-time employment.

Mr. Murphy has further shown his commitment to the students of Elizabethtown College through his support for the establishment of the School’s offices in the Hoover Center for Business, giving the adult students a state-of-the-art suite of offices to call home. He and his family (daughter Shannan is a 2001 graduate) have made the dream of education come alive for future students by endowing the Edward and Carol Murphy Scholarship and the newly established and innovative endowed Charlotte W. Newcombe Scholarship. The Murphy family’s commitment will ensure that the dreams of future students can be fulfilled. 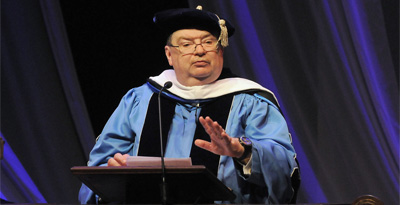